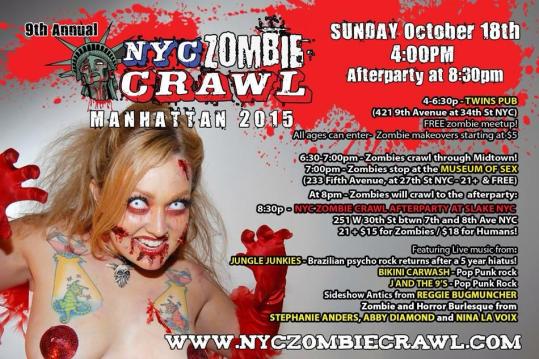 The NYC Zombie Crawl after party will feature live music, sideshow, performance art and burlesque including the return of a few bands who have not performed at the crawl in years:

Also a new band to the Crawl are Brooklyn punk rockers
J AND THE 9s!
http://www.jandthe9s.com/

And all the bands are female fronted!

Stay tuned to www.nyczombiecrawl.com for up to date details!!

From the people who gave you 80’s Cartoons Burlesque and Kinky Kittens Fetish burlesque nights brings you the next Chaotic Cabaret show “BEELZEBOOBIES” A night of celebrating everyone’s favorite Satanic Savior with Scantily Clad Women, Inappropriate Jokes and lots of Booze, Join us for all the Chaos

Stage Kitten for the evening will be Nora Nightingale

After shooting some promo videos with Troma Entertainment, my friend Elizabeth and I were asked to perform some burlesque at an upcoming live taping of “Kabukiman’s Cocktail Corner” at the Trocadero, for Average Superstar Film’s event, Liberty Massacre (2). So we did just that, except we made it a much better version of burlesque.. OUR version! We decided we wanted to do a live wrestling match for the Super Tromette Title Booty Belt! For good measure, there was a teeny bit of dancing,  jackets came off, and it was timed to Entombed’s “Seeing Red”. We didn’t have much time, but we busted our asses scripting, costuming and choreographing, and pulled it off!!

Originally, Labia Leakstra (my character) was to be pitted against Shabu Shabu (Elizabeth’s first character). In a random, vicious attack during a previous taping, LL squashed SS on camera- humiliating her all throughout Tromaville! At the end of the “match”, Leakstra smashed her STD ridden goo all over Shabu’s face. We learned at the Trocadero event, that Shabu later died from the incident- will it be the last we see of her?

Here you can see the gallery of LL versus her newest opponent, Double D. Mentia (Elizabeth)!!! Straight from Tromasylum, still in her straight jacket- she was thrilled to be out on a day pass!  After bringing her ass all the way from the toxic junkyard of Tromaville, Leakstra was not pleased with the last minute change up, and was ready to shed blood! At the end of the match, the audience declared a tie, but these girls weren’t having it! They clotheslined their announcer, grabbed the “Title Booty Belt” and walked off together. Could this be foreshadowing of a future alliance?

Stay tuned, because this won’t be the last you see from these two badass babes!

GASH’s first international tour was a huge success! We made a lot of new friends, ate some very tasty food, and I wrangled up a few new slaves.  Canada is such a beautiful country- I can’t wait to be back inside of it!

Stephxecutioner will be hitting the road in March with the S&M themed band she Dommes for, GASH! Check her out at these locations: